fiction and other writing 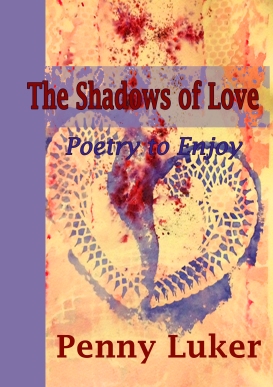 We’ve all experienced love, in one form or another, well this book explores how love affects us, by using lots of different forms of poetry. Love can bring great joy, but also pain. We experience the unconditional love we have for our children or parents, and the worry if they are not happy. In today’s world we sometimes love objects. They can become important in our lives. Love can even turn to obsession.

This book is poetry that explores the topic of love from many angles, but the poetry is accessible and easy to enjoy. I’m just awaiting the final proof copy before it’s released.

There are over thirty brand new poems for you to explore. Watch this space. 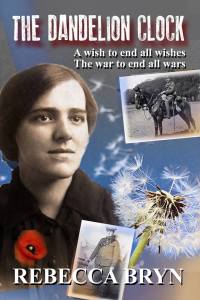 I’ve read some of Rebecca Bryn’s book and enjoyed them, so was delighted when she agreed to visit my blog to tell us about her latest book.

The Dandelion Clock is my latest release and is set during the Great War, from 1914 – 1919, in Gallipoli, Egypt, Palestine, and England. It was inspired by something my grandfather confided in me just before he died, and I realised, much later, that there was a heartrending story there. The research was a real eye-opener, and the action is fact-based. I had no idea that men and mules froze to death in Gallipoli, drowned in trenches susceptible to flash floods, or died from dysentery, malaria, heat stroke, and dehydration in the Sinai Desert and the Jordan Valley on top of being shelled, shot at, and bombed.
Synopsis:
Bill, a farm boy brought up in a village on the Duke of Buccleuch’s Northamptonshire estate, is plucking up his courage to ask his sweetheart, Florrie, to marry him. Florrie has given up her dream of being a dancer to bring up her siblings and protect them from their violent, sexually abusive widowed father. For her, marriage to Bill is love, escape, and protection: a dream to be clung to.
When war breaks out in August 1914, Bill and Florrie’s dreams are dashed – Bill is sent with the Royal Buckinghamshire Hussars, a yeomanry cavalry regiment, to fight in Gallipoli, Egypt, and Palestine taking with him a horse, Copper, volunteered for service by the 7th duke’s young daughter, Lady Alice. Bill makes promises before he leaves: to marry Florrie if he survives and to bring his beloved warhorse, Copper, home safe to Lady Alice.
While Bill fights Turks and Germans in appalling conditions, Florrie fights her own war with rationing, poverty, the loss of her menfolk, and her father’s drunken abusive temper. As the war proceeds, fearful and with her resilience faltering, her feelings of self-worth plummet, and she turns to her dandelion clocks for reassurance. ‘He lives? He lives not? He loves me? He loves me not?’
When Bill returns to England after the armistice in 1918, both he and Florrie have been changed by their personal journeys. Can their love survive five years apart and the tragedies they’ve endured? Will Bill keep his promises to Florrie and Lady Alice?

A heartbreaking story of lovers torn apart by the Great War. An insight into the military history of the 1914 1918 war in Egypt as fought by the Royal Buckinghamshire Hussars and the Queen’s Own Worcestershire Yeomanry – some of the ‘PALS brigades’. Considered ‘not real soldiers’ by the regular army, the Royal Bucks and the Worcester Yeomanry fought with great courage and suffered huge losses. In fact, the Worcesters sustained more losses than any brigade in any war, and the PALS earnt the respect of all who fought. Although Military Fiction 1914 1918, it is a story inspired by real people and based on real events that doesn’t forget the role of women in the Great War or their need for a WW1 romance.
‘An amazing story reminiscent of Morpurgo’s ‘Warhorse’.’
8,000,000 horses, mules, and donkeys died during the Great War, many from gunshot and gas, but many from exhaustion, thirst, and disease. https://www.horsetalk.co.nz/2011/12/16/true-story-britain-war-horses/ Their contribution to the war effort can’t be overestimated.
To honour the memory of those who gave their lives during the Great War, royalties from pre-orders and sales up to Remembrance Day Centenary on November 11th will be donated to Soldiers’ Charity.org. https://www.soldierscharity.org/about-us/what-we-do/
Royalties also to http://www.thebrooke.org/get-involved/every-horse-remembered to honour the millions of horses, mules, and donkeys who didn’t come home after the Great War.

REVIEW:
‘It’s only a century since the first world war came to an end. It’s easy to forget that the conduct of warfare was then still heavily dependent upon horses. Cavalry regiments still formed the backbone of the British army.

Bryn’s grandfather served in such a regiment and it is that fact that inspired her to write this epic tale. But she does not limit herself to the rigours faced by serving men. She takes a close look at the lives of those left behind in England. The older generation of men whose labours kept ‘the home fires burning’ and the women of all ages who shouldered the burden of clothing and feeding everyone whilst worrying about the fate of their young male relatives in far flung corners of the world.

Another factor that sets this book apart from many others set in World War I is the way it concentrates on an often forgotten theatre of war. This is important because the events that Bryn relates reverberate a century later. After describing pre-war rural life, with shades of Downton Abbey, the story moves to the period of training that volunteer soldiers underwent. This enables Bryn to introduce us to a romantic triangle as her protagonist, Bill, and a young woman, Martha, with whose family he is billeted, develop a fondness for each other that leaves him agonising about his espousal to his sweetheart, Florrie, in his home town.

The action then moves to the ill-fated expedition to the Dardanelles and, thence, to Egypt and the Holy Land. Through all the minor victories and set-backs that characterised these campaigns we see not only the suffering of the men but that of the horses. Copper, a horse belonging to Lady Alice, the daughter of the ‘big house’, is an important character in this story. Her suffering, and that of the other horses, will break your heart. Bryn has stated that she wept frequently whilst writing such scenes. It is that emotional engagement with the suffering of all her characters – back home in England the relationship between Florrie and her father goes from bad to worse to terrible – that makes Bryn’s writing such a roller coaster ride for the reader.

I’ve read several of Bryn’s books and am an unashamed fan. I had the privilege of access to an early draft of this one and found it to be the best yet. Because she is self-published, this book will not get the sales it so richly deserves. That is a shame because Bryn is, without doubt, one of the best writers of historical fiction writing in English today. In The Dandelion Clock you will not just read about the horrors of war, you will live them in all their stark reality.’ – Goodreads 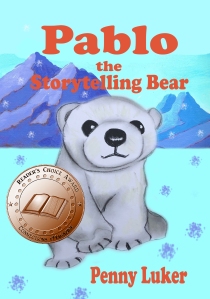 The story of Pablo the Storytelling Bear is a mixture of magic and real life for polar bears, who are struggling for survival in some parts of the world. Pablo is a magical bear, aided by Gertrude Hermione Humbug. He tells Bill about how polar bears survive in the wild and what happens if they live in a zoo. Of course the magic element allows some fun to be incorporated in the stories.

You can read this story for free on kindle unlimited and it’s only £1.99 for the ebook and £5.00 from Amazon here.

If you enjoy reading, take a look at the other winners in the Connections eMagazine, (link above). I shall certainly be reading some of the winners’ books. The current edition also has some 100 words flash fiction, which are fun. Why not have a go and write a hundred word story, yourself?